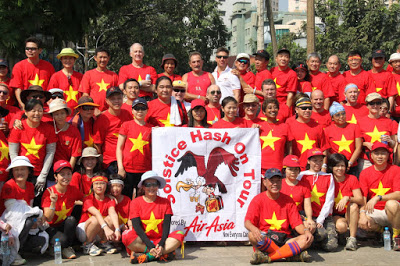 For the majority of us who have never traveled to Ho Chi Minh City, this SHOT trip gives us an opportunity to see for ourselves the battleground that gripped the world for well over a generation and split the international community, nations, and families asunder; from early ‘50s to mid-70s, where the poorly equipped peasants-nationalists and the powers-that-be fought tooth-and-nail for, the one side for independence a la communism, the other to halt the domino. Impressions of the capitulation and panicked evacuation of Americans and their Vietnamese allies, particularly the helicopter scene atop the American Embassy, are still deeply edged in the minds of millions the world over who watched agape the finale to a foreign policy fiasco, since deemed America’s biggest folly.  It is amazing that, just over a generation after the epochal triumph of fierce nationalistic determination over firing power, the much-feared and maligned image of a society clad in Mao-styled jackets and peasants’ garb is nowhere to be seen, much less the omnipresence of gun-toting cadres at every nook and corner.

HCM City today is truly a contrasting enigma from those hellfire days, evolving into just like every modern metropolis this side of Mother Earth, with the cacophonous blare of commerce and industry everywhere you go. The nightlife here, imbued with so much youth, enthusiasm, and enterprise, rivals that of many big cities with its vibrancy, perfect panacea to our SHOTers’ half-yearly sojourn. The opportunity to sample some of Vietnam’s most exalted culinary delights are not to be missed, particularly the steaming hot beef pho, the rice paper-wrapped spring rolls, and the must-try micro-brewed beer hoa, which are ridiculously affordable, a five-mug jug costing as low as RM4.00!!!

A near record-equaling crowd of SHOTers took advantage of the affordable Air Asia fares, particularly the recently added-on flight that brought air fares markedly lower, to sample this remade Saigon, the proverbial rising phoenix best exemplified around its District 1, centered in and around the Ben Thanh Market. Phatty’s Bar, the venue for the Registration Party on Friday, December 11, was a hive of activities, with a horde of 170 SHOTers and some local hashers descending on the joint, jamming the place to elbow-to-elbow capacity. The air of festivity was heightened by a sea of flowing red-shirted motorcycle-honking fans bearing the Vietnamese flags swarming the streets, as the locals were celebrating a national soccer win in the SEA Games. With such an exuberant contagion, the party lasted longer than planned, kicking the SHOT weekend into a portentously auspicious high-gear.

Tri An dam was well chosen for the main run on Saturday afternoon, for the area has enough hills and mature vegetation approximating hashing country back home in Malaysia. However, the trees here are of the reforested commercial varieties, particularly acacia and cashew, cultivated in neat rows as like rubber and oil palm, so affecting a familiar sight to the runners. Our group was augmented by around 60 local HCM hashers, with the choice of a ‘normal’ and a long run. The hot and humid conditions saw us completely drenched with perspiration at the end of the run, but a borrowed water pipe from a nearby house allowed us to hose down, much to the amusement of the locals, in particular the antics of some of our bashful and less-than-modest members. After a combined circle on site, we adjourned to the Lan Anh Restaurant, where we were served some absolutely scrumptious ‘fusion’ food, although the staff there were hard pressed catering to such a huge number of us.

We congregated by the jetty just in front of the Renaissance Hotel mid-morning of Sunday, all dressed identically in the Vietnamese-star, SHOT-emblazoned red t-shirt, a blatantly conspicuous spectacle to the passing traffic.  The trail took us across the river by ferry, through the maze of a ghetto, and thence back across again, through various intersections, then passing the historic French Quarter - whose dwellings have mostly been converted into quaint niche restaurants and chic boutiques - finally ending up at the BBQ Garden Restaurant. A superb lunch was served, the circle again convened, the local hashers were thanked for their assistance, and solo hare Mike Sanders was congratulated for his untiring effort in making the SHOT weekend a runaway success. Amidst the bantering, there were promises of reciprocal visits by the local hashers, convinced by our mode of hash travels via the Air Asia economy flights.

As usual, upon the  conclusion of the official SHOT programs, SHOTers set off for their own side tours, mainly to 4 main destinations – Vung Tau in the Mekong Delta, Dalat in the Central Highlands, Hue/Danang by the central coast, and south-east to the Cambodian border. HCM City proved to be the perfect gateway to the various touristic gems of this land of such assorted contrast.