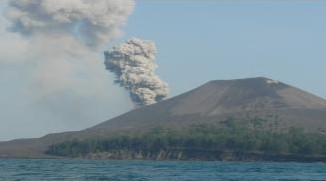 After a slow build-up, the number of participants signing up (read: purchased their Air Asia tickets) for SHOT # 7 in Jakarta/Anyer/Krakatoa went up like the proverbial crescendo in the last month, doubling up to about 120 participants. This number represents the 2nd largest group for any SHOT, only outnumbered by SHOT # 5 in Hanoi, which elicited 146 participants. It helps that there are 4 daily flights into Jakarta, and tickets remained reasonable till almost the eve of event.

Participants were spoilt for choices regarding flight arrangements, and as a result SHOTers were flying in on various different flights, some electing to get in a day or two earlier, while the vast majority arrived on the Friday, June 19th. The long SHOT weekend has now taken on a regular routine, with the Registration Party on Friday evening, main Joint Run with the local hash on Saturday, and a fun/hangover run on Sunday, culminating with the usual boisterous ‘circle’ at a bar/eatery.

The evening of Friday, June 19, saw a big congregation of hashers down by the foyer, or just milling around at the entrance, of the Hotel Melawai in Block M, the entertainment district of Jakarta. Robin Cox, Liz Tan, and a few others who arrived a day earlier, have the presence of mind to ‘recce’ the venue for the Registration Party, the Everest Bar, owned by fellow hasher Anish ‘Sake’ Shakya who is of Nepalese origin. This proved to be a clever initiative, as the venue was some 1.2km and many turns away! A detailed description was provided on copied paper, and this ensured that we could all make it to the party without losing our way en route. The registration of participants, distribution of freebies comprising a t-shirt and sarong, and collection of payment for all the events lined up for the 3 days, charged at only RM180 per pax, was ably handled by volunteer Liz and Nan, and fantastic entertainment was provided courtesy of the bar, although the finger food proffered was, well, finger-sized! Needless to say, at the end of the party, many sauntered off to eateries on the way back to the hotel.

Early on the morning of Saturday June 20, hashers were all raring to set off for Anyer/Krakatau, not wanting to miss the buses which were due to depart at 9am. We piled onto 2 big buses, and 4 smaller vans, and the journey took 3 1/2 hours, finally arriving at the 5-star Marbello Hotel in Anyer at 12.30pm. There was some consternation when the reception claimed they didn’t receive the required room reservation, but this was later settled to our satisfaction when the ‘shortfalls’ were made up for with penthouse suites! Most were nicely surprised that we were charged 3-star rates for a 5-star facility, thanks to the superb effort of the hares for the weekend, John Lavelle and Chu Chu, working in tandem with local Krakatau hasher Craig.

More confusion reigned when the transports to the run site did not arrive to pick us. It later transpired that the same buses that took us from Jakarta were to deliver us to the run site, but due to a lack of communication, the drivers were not properly informed, and have taken off, leaving us in the lurch. Some quick thinking by Kamikaze led to the hares being contacted, and ‘cattle trucks’ were dispatched as transports. Hashers were tickled pink to be corralled onto the open-top trucks, packed like sardines but in good humor due to the air of festivities, like clowns being led to the circus, which caused a lot of amusement to the kampong folks as we were whisked off along the narrow coastal road to the run site about 20km away. On hand to welcome us to the run site were a horde of around 60 local hashers belonging to the Krakatau Hash, who mostly hailed from Jakarta. Some were familiar faces who have had stints in Kuala Lumpur in earlier years, so there was plenty of camaraderie and hand shaking.

The hares and local hashers then jumped into their cars and led the way to the starting point of the runs, some 6 – 8 km down the road further east from Anyer. We were deposited in the middle of a kampong, given a very quick briefing by hare John Lavelle about how to get onto the short and long runs, and promptly set off with gusto down the track towards the paddy fields.

For those who chose the shorter run, it was a wise decision, as we have lost invaluable time due to the transportation problem, and daylight was falling fast. The long run, which was logged at more than 12km, took the runners along a series of jungle-clad hills, mostly following its ridge lines, but at times through valleys and contours, making the going most arduous. By the time the front pack crested the final plateau, it was dusk, and the precipitous descend was painfully slow. The home trail finally leveled out at the lower reaches, passing through some orchards and kampungs in pitch darkness. The last ¾ km before finishing at the run site was torturous, as the trail went along paddy bunds with width of only about 10 inches and, coupled with the poor visibility, led us to lose our balance and splash into the water-logged fields repeatedly. Except for the first two finishers, most of the rest reached the run site more than 3 hrs after commencing the run, utterly exhausted from the exertions and falls. The stand pipe at the run site was a huge relief, allowing us to clean up our muck-caked bodies and freshening sufficiently, then changed into hash garb for the circle.

The jointly held circle between the Krakatau Hash and SHOT was grippingly-hilarious as usual, with all kinds of charges, real or imagined, leveled by the various Grandmasters on purported sinners and miscreants, who were unceremoniously ‘sentenced’ to down-downs with the Bintang beers. The whole crowd then adjourned to the Dragon Restaurant opposite the Marbello Hotel for the On On.

For the main protagonists of the weekend – hares John, Chu Chu, GMs Kamikaze & Opera, as well as the local hare ‘FKG’ Shirley and SHOT volunteers Nai Kwong and Ah Meng, there was no respite, as one of our own – Dr. Jagjit – has still not returned to the run site from the run. It was 11.30pm, some 7 hours since the run started. We again changed into hash gears, complete with torches and bottles of mineral water, and headed back to the starting point, breaking up into 3 teams to increase the chances and possibly reduce the time it will take searching for him. One of the teams went in from the home trail, another took a path straight to intersect the mid-point of the run at the plateau, whilst the last retraced the run from the starting point. It was well after 1am when a call came in on the mobile from the first party that the straggler has been found, somewhat disoriented from exhaustion and dehydration, with a twisted ankle, the latter accounting for his excruciatingly slow pace and eventual fall down a slope and losing the paper trail. There was no time for jubilation, however, and we ambled back to the run site, and were then driven back to the hotel, arriving well after 3am, completely knackered.

Sunday morning’s ‘hangover’ point-to-point run, started from the Marbello Hotel’s foyer, ostensibly for a 5km easy run to the Blue Moon Bar, which is part-owned by the infamous Nick Leeson, whose now well-chronicled single-handed exploits in derivative trading bankrupted the august 2-century old Barings Bank, a demolition unprecedented in the annals of the British banking industry. The promise of a 5km easy run, of course, was a ruse to work up our thirst for the amber liquid, for it was timed when the sun was almost at its zenith, easily 7km in length, passing through the paddy sawahs, a long stretch of beach, under the unrelenting heat of the scotching sun. The hares’ objective, of course, was attained, as the throngs – those who actually did the run – guzzled up the golden nectar like thirsty camels upon reaching the finishing point at the Blue Moon Bar.

The atmosphere was one of carefree relaxation, as we lazed around the lawn and partook of the scrumptious buffet lunch provided, enjoying the Bintangs served by delectable promoters. The circle was entertaining as usual, and Jon Button was at his usual best belting out quick-fire numbers, much to the astonishment and delight of the adoring crowd. An inspired Opera later came out with an award to the 2 SHOTers deemed to have given most constructive suggestions for the weekend, and named them ‘hares-in-waiting’ for SHOT # 9, slated for June 2009 (SHOT # 8 having been set for Vientianne in Laos, with Jimmy Leggett as chief hare). Lillian Wee and Wendy Lum have the enviable reputation of receiving this prized honor.

With the completion of all SHOT events, about 20 chose to return home on the Sunday, while the rest stayed for another indulgent night. The same transports turned up on Monday morning, and delivered us to the Jakarta airport. While the majority went back to KL, about 30 headed to Solo for a post-SHOT excursion to tour the world-famous Borobudor temple complex and other attractions thereabout, eventually returning via Jogjakarta by another Air Asia flight.