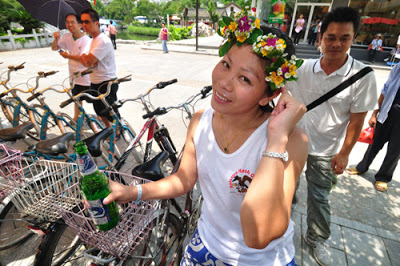 Beguiling Guilin. What a charming rhyme that befits its rhythmic charm! Of all the SHOT destinations thus far, Guilin turned out to be the most popular, what with its immense fame for the beauty of its natural landscape centered around its profuse jagged limestone knolls and the idyllic rivers that cuts through them, both of which have been commonly depicted since ancient days in Chinese poetry and calligraphy. As a destination, Air Asia – and its regular flyers like SHOTers – have found a definite winner. There are so many alluring attractions, both old and new, and features of interest, to the extent there just weren’t sufficient time for us to take in or visit the abundant places suggested. There are innumerable touristic things to do, like bicycling, rafting or cruising, off-road trekking, and - for the adrenaline-driven – rock-climbing. Little surprise, then, that SHOT # 9 drew a record 180 participants.

As usual, participants grouped together and arrived on different Air Asia flights, staying on average 6 – 7 days, taking the opportunity to tour the pre- or post-ramble side trips to the Shangri-la-esque tribal villages of the Zhuang minority tribe nestled on the highlands amidst terraced rice paddies and, for some, also the Dong villages, famed for their ‘wind and rain’ intricately hand-crafted bridges plus their timber and bamboo watermills.

The hares and co-hares did a marvelous job during their recce trip in March, and obtained fantastic room rates, so that a standard room at the 4-star Sovereign Hotel in Yangshou, which afforded a view of the majestic Li River, were had almost for a song. The venues chosen for the weekend events were also well thought out for their panoramic settings, as well as the many interesting things that hashers could see, do, participate, or attend, all mostly within walking distances.

Everyone turned up for the usual Friday evening registration party. Some, complete strangers in fact, joined us for the first time having read about our group through the internet and found common ground with our credo. The ubiquitous garb and camaraderie stayed true to hash traditions. The party took on a life of its own, as all hash parties does, anywhere, anytime, anyhow. Soon, however, the numbers began dwindling due to the itch to explore the re-made historic West Street and the rush to catch the highly-acclaimed classical musical, Liu San Jie Impression, produced by the Academy Award winner Zhang Yi Mou.

The free-and-easy Saturday morning saw many set off for bicycle rides into the hinterlands, bamboo rafting, or cruising on pleasure boats. Others simply wandered around, bargain hunting, or went in search of the culinary delights unique to the area. There were many unexpected discoveries, like if one went to the right places, seafood and other live animals were slaughtered and cooked on demand!!! As fresh as flesh can be! Also, how about a platter of fish simmering in a broth steeped in local beer? The local version of fermented taufu, which in olden days was a stable accompaniment to many meals for the poor and downtrodden, is renowned throughout China, and is best likened to the Chinese answer to cheese. Absolutely wow!

We were bussed out in the mid-afternoon to the main run of the SHOT weekend in Xingping, 40mins away. The centuries-old picturesque village was just the ideal location, situated by a river bobbing with bamboo rafts and Chinese river junks, with the surrounding limestone hills acting as backdrops to a picture-perfect landscape. An interesting 8km run took the hashers through footpaths and tracks that meanders along both sides of the river, then a surprise beer-cum-water stop at a riverside terrace, into some orchards and thence on up a steep cattle path to the saddle of a massif and into a cave where a check was cheekily laid to pique the interest of the FROPs. A long 4km home trail ensured, and this turned out to be very taxing due to the brutally scorching sun that simply sapped us. At the finishing point, the runners were rewarded with stunning his-and-hers’ samfoo and qi pao that were specially commissioned and made for the occasion.

The Pub Crawl on Sunday morning took the participants through a maze of alleyways, parks, river-front attractions and, necessarily, quite a few pubs that dotted the areas, particularly around the streets collectively known as West Street. The spectacle of almost 200 similarly attired hashers in identical vests and headbands must have been quite a sight to behold to the onlookers – shop assistants, owners, local inhabitants, or tourists - most of whom smiled in amusement to our ‘antics’ of running and then stopping to guzzle the local beers in copious amount.

The final stop was at an eatery, where we have our On On and farewell circle, followed by the hash swansong, “Swing Low”, sung with gusto by all and sundry to signal the final curtain for an enjoyable SHOT weekend. The venue and dates for the next SHOT was announced, and while a few left for home, most of the rest left for their planned tours.